On the morning of July 24th, 2021, an aircraft (a PA-24 Piper Comanche) from CASARA Ottawa was engaged in training exercises just east of Ottawa. During the exercise they heard a MAYDAY call from an aircraft in distress. The distress aircraft had encountered an engine failure and advised it was going to conduct an off-airport landing.

As the CASARA aircraft approached the crash location they were able to electronically home to the downed aircraft’s exact position with their specialized aircraft-mounted homing equipment.

Once overhead, a communications link on VHF radio with the downed pilot was attempted with no response. Out of cell phone range, the quick thinking crew knew that they could communicate through the NavCanada Montreal Area Control Centre (ACC) to relay their position to JRCC which allowed the 424 Sqn aircraft to quickly arrive at the crash scene for the rescue.

The CASARA crew remained on scene flying overhead until RCAF aircraft arrived to begin rescue operations. The Search and Rescue Technicians (SAR Techs) from 424 Sqn Trenton were hoisted down from the Griffon helicopter to render medical assistance to the downed pilot who was subsequently hoisted onto the Griffon helicopter and flown to Pembroke Hospital. She was released from hospital later that day and has expressed her heart felt thanks to the Search and Rescue Crews.

Below is the flight path of the CASARA aircraft… 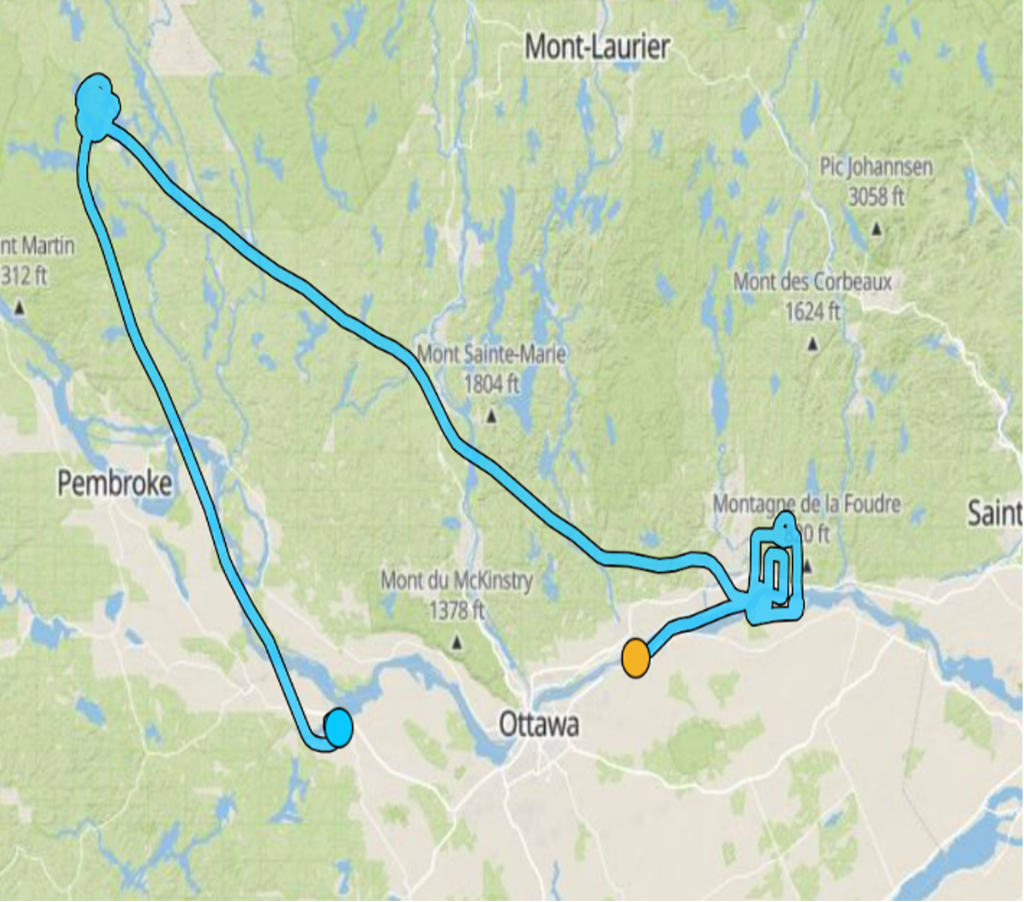 Shot of the crash scene from above from our CASARA Twitter feed.

Members of @RCAFOperations 424 Squadron and @CASARA came to the aid of a pilot whose plane crashed north of @Petawawa. A @RCAF_ARC CH146 helicopter transported them to Pembroke hospital. #RESCUE #SARpartners pic.twitter.com/hhGL4piEwY

If you want to see it on our social platform, click here to view it on our Twitter page posted by JRCC Trenton!

Congratulations to CASARA Ottawa air crew and ground support for their professionalism and a job well done!

“That others may live”

The Civil Air Search and Rescue Association (CASARA) will continue to evolve and support the Canadian Search and Rescue (SAR) and SAR Awareness Programs through leadership, continuous training of its volunteers and education of the general aviation community.

SmartPilot is an aviation website developed by CASARA to enhance flight safety in Canada, with support from the National Search and Rescue Secretariat.

SmartPilot will provide a rich resource of interesting and informative articles, videos and interactive programming to help inform pilots about how to be safer in the air.